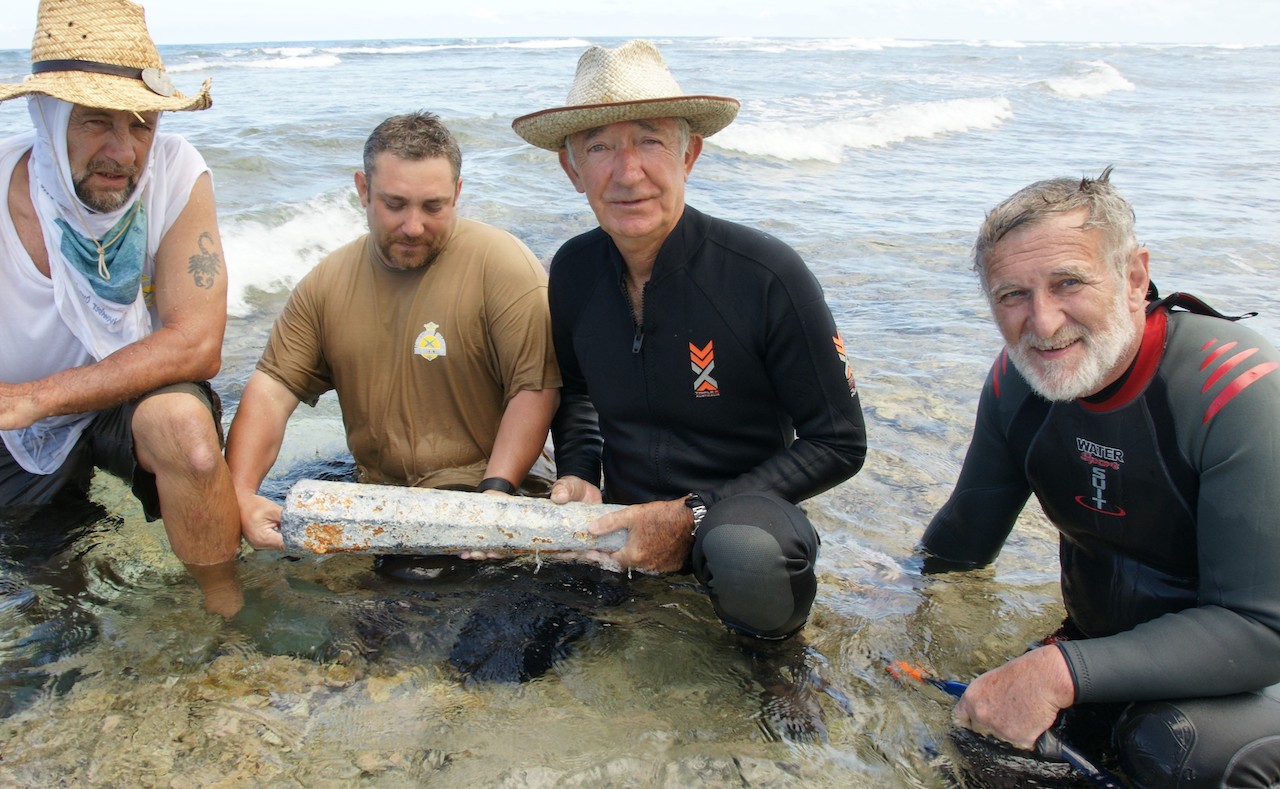 In 2008, the Salomon association organized its eighth expedition to Vanikoro in the foot steps of the La Perouse expedition, with the support of the Dumont D’Urville, batral of the Nationale Marine.
On land, at sea and on the reef, different groups were at work. On land, a qualified team using state of the art equipment, such as ground radars and magnetometers, searched in vain for tombs dated from the time of the shipwreck, near the "Camp des Français".
At sea, divers took turns in meticulous excavations on sites already explored and becoming dangerous by dint of being dug. Some interesting objects were found and will complete the existing collection of the Maritime Museum of Noumea from previous expeditions.
The surprise came from the reef overlooking the fault site. At low tide, as Peter Dillion had done in 1827, Alain Conan’s team, including Admiral Battet, naval chief of staff, carried out research using metal detectors. A major anomaly was quickly located in a small basin of sand located about fifty meters from the fault site. After more than an hour of strenuous efforts, with water up to their waists, the team which took turns gropingly finally succeeded releasing a very heavy mass. The surprise was considerable. It was a lead object weighting around fifty kilograms, quickly identified as being a lead sounding-weight. 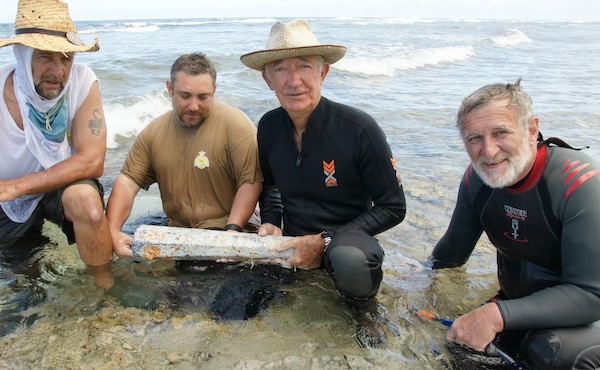 Pic.2 - Arial picture of the site. We can see on the left boats used by the divers working
on the site of the Boussole and on the right, the team having just discovered
the lead sounding-weight on the reef. Photo Christian Grondin - Association Salomon.
On board the Dumond d’Urville, Rear Admiral Francois Bellec, marine painter and  writer, and also ex director of the Paris Marine Museum from 1980 to 1998, admitted to never have seen a sounding-weight of this size. 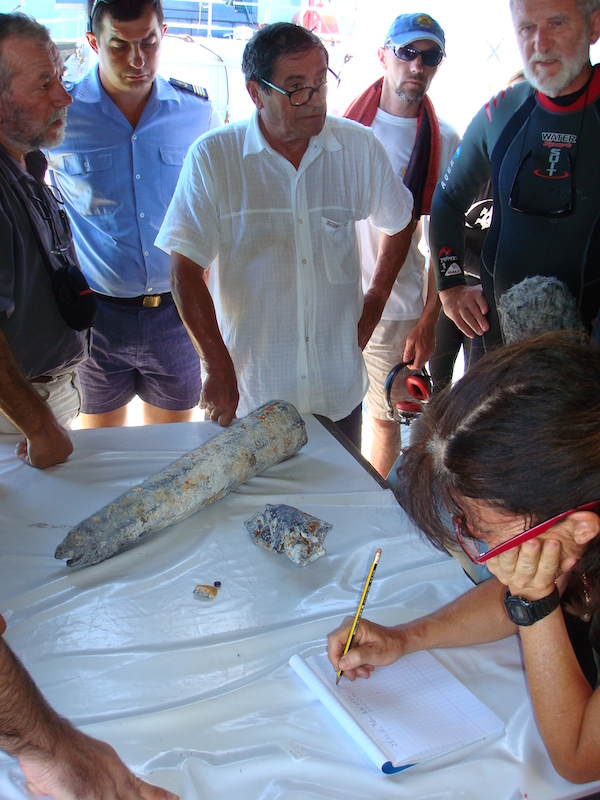 Pic.3 - In the center of the picture rear admiral Francois Bellec and on his left
admiral Jean-Louis Battet. Photo C Grondin - Association Salomon. 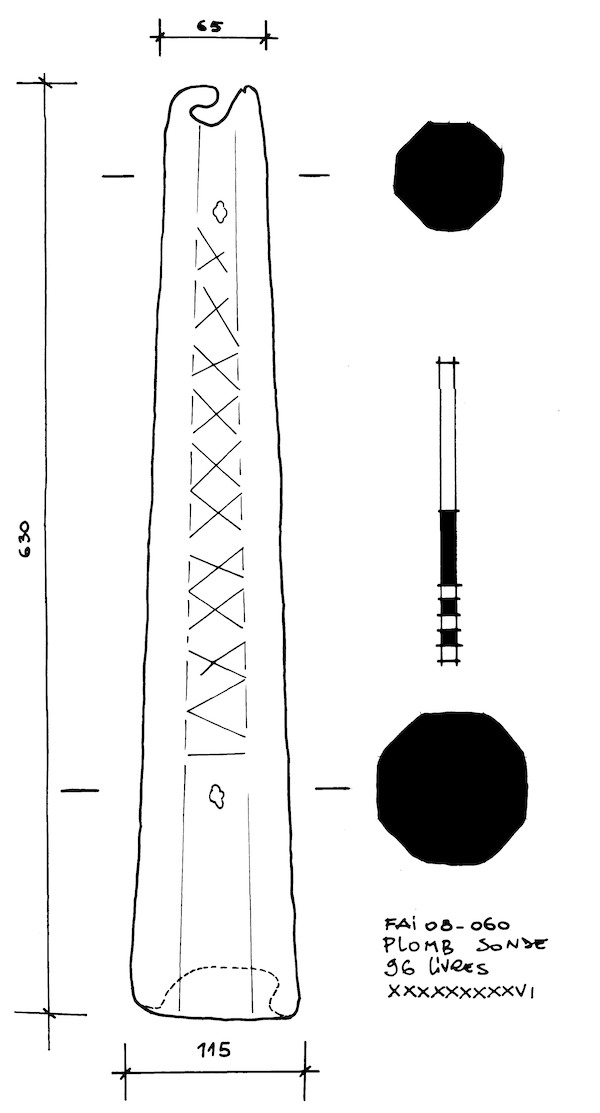 Pic.4 - Details : two fleur-de-lys and the weight in pounds written in romain numbers, about 47 kilograms.

The usefullness of lead sounding-weight

As its name suggests, the sounding-weight allows you to mesure the depth of water under the boat.
From the 15 th century, Royal ships, specializing in hydrography, carried on board a whole serie of weights of different sizes and weights.
In the beginning of the XVIII century, marine documents mentioned sounding-weights that the largest weighted 20 to 50 kilograms. These were used to measure the depth of the sea. 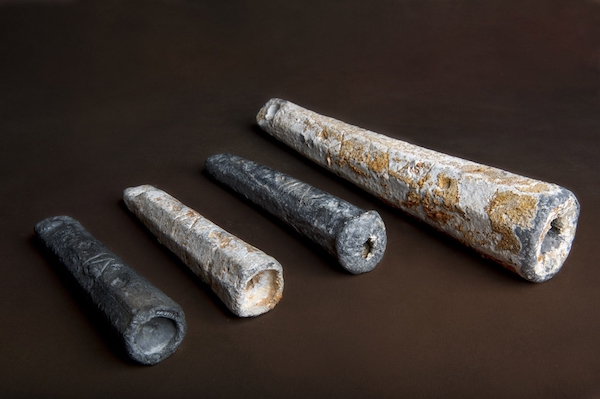 Pic.5 - Different sounding-weights found on both under-water sites. We can observe the cavity
where the melted the tallow was placed. Photo Patrick Dancel - Association Salomon.
In addition to the depth, they gave an idea of the sea bottom nature. For this, they had in their lower end a cavity filled with tallow. By touching the sea bottom, bits of the soil components encrusted themselves in the tallow (sand, shells, rocks etc..).

Recently, by carefully observing the painting done by Louis-Phillipe Crépin in 1806 representing the sinking of the two biscayennes in Lituya Bay passage in Alaska on July 13 1786, we had another surprise. Pic. 6 - The sinking of the two biscayennes, caught in the tidal bore in the Lituya Bay passage.
We can also see a third boat, commanded by M. Boutin who was the only one left to report the accident.
This magnificent painting (*1) was commissioned from the artist by Alexandre Marquis de Laborde in homage to his two elder brothers ( Edouard-Jean-Joseph and Ange-Augustin-Joseph Laborde ), who disappeared during this event along with nineteen other sailors. The details of this work are disturbing in their truth. The painting is based on an engravure from Ozanne in 1797 illustrating the historique book Milet-Mureau. It is probable that only expedition survivors were able to give the painter these details. We naturally think of Jean-Batiste-Barthelemy De Lesseps, Russian vice-consul and translater who disembarked from L’ Astrolabe in Kamtchatka on September 29 1787 (*2), as well as of the Marin Guard, Mel de Saint-Ceran who disembarked from La Boussole in Manilla on April 16 1787 for health reasons.
On the right of this painting, we can see, leaning forward of the biscayenne, two officers throwing lines towards the other sinking boat. They probably are the two brothers that are represented. It is obviously a staging in honor of the two brothers, because, in reality, it seems that the two biscayennes sunk out of sight of each others. 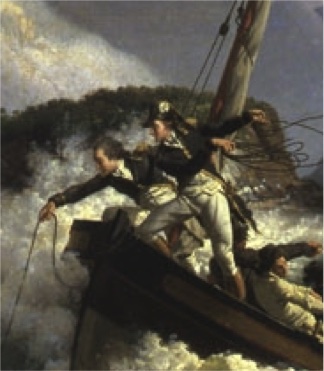 Pic.7 - Detail: the two figures at the bow of the biscayenne
probably represent the two elder Laborde brothers. Pic.8 - We can see, on the left of the man at the tiller, a hand winch
and a lead sounding-weight of similar size of the one we found.

Another detail of the work brings us back to the discovery of the lead sounding-weight on the Vanikoro reef. By carefully observing the rear of the Laborde’s brothers boat, we clearly see a hand winch and...an enormous lead sounding-weight, strangely resembling the one we are interested in.
The question that can be asked is : why did these boats, sent to do the hydrography of the passage at slack tide and in shallow waters, carry on board weights for deep sea?
Not knowing the answer, we can imagine that these boats made, at each stop over, the hydrography of the places. In sheltered bays, such as Lituya Bay, where currents and winds were slow, each information had to be precisely reported on the map relative to landmarks. Bordas circles and graphometers were then very useful. Rather than setting anchor for each new measurement taken, in order not to drift during the calculations, were they not taking advantage of these enormous weights, which gave depth and nature of the bottom of the sea, to hold the small boats in place?

The question remains, and if any of you knows the answer, we are paying attention.

(*1)- It seems that this painting has been acquired by the Seattle Museum in the USA in 2017.
(*2)- He had for mission to bring to King Louis the XVI letters from Mr. De La Perouse. His trip lasted a year, and upon his arrival in Versailles on October 17 1788, Mr. De Lesseps was surprised to hear that there was no news from the two frigates (historical journal of Mr. De Lesseps voyage).