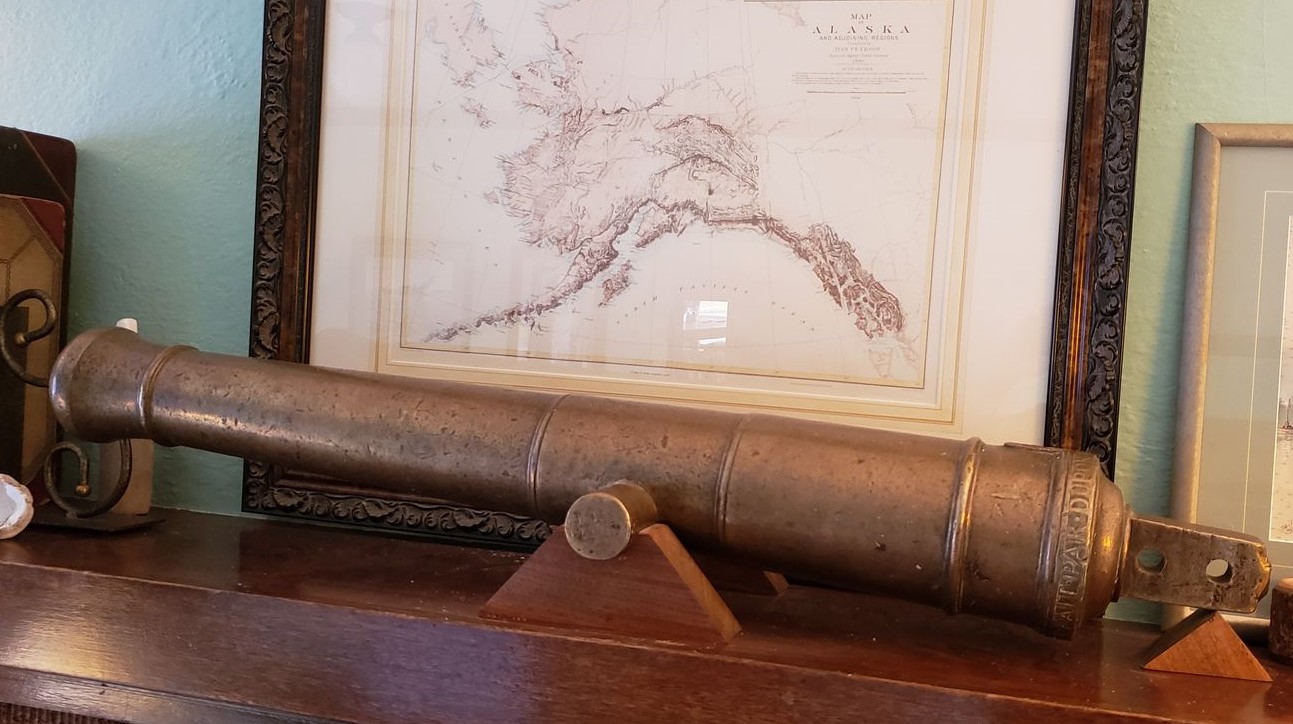 This cultured man, well aware of the passage of La Pérouse expedition in Alaska during the summer of 1786, asked us for informations about a small bronze cannon, which he inherited from his father. This fisherman and ship owner, was born in Petersburg, a small town on the north of Mitkoff Island in Alaska, regularly frequented the Indian inhabitants of the region. It was during one of his fishing campaigns in the 1950s that he acquired the canon from the Tlingit Indians of southern Alaska.

We can reasonably assume that it comes from the French expedition. It is interesting to note that Lituya Bay, where La Pérouse stayed in July 1786, is three hundred and fifty kilometres from Petersburg as the crow flies.

Keenly interested, the Solomon Association asked Joël Marc, a friend and fervent fan of sailing in Alaska aboard his ship JADE*1, for a service. We asked him if during his scheduled at the end of 2020 in Alaska, he would be able to contact Mr. Brennan for more information on the object he owned.

An appointment was made. Cautious at first because of covid-19, Mr. and Mrs. Brennan warmly welcomed our friend and invited him for diner. Joël spent a pleasant evening in their villa where the small cannon was  in the spotlight.

This bronze cannon, by its size and weight is in fact a stone-throwing mortar. We were attracted by the inscriptions that it bears and that we did not recognize. At the back of the cannon we could read : MADE BY DUPONT AT ROCHEFORT – 1762. On the left trunnion, we also noticed the inscription N°36 and the one on the right 140 corresponding to its weight in pounds*2.

It is the same type of inscriptions that we can find on the trunnions of the  stone-throwing mortar  was quite different than that found in Vanikoro, from Peter Dillon in 1827 until our last expedition in 2008. Surprisingly, instead of the usual breech knob there is a thick vertical plate with two holes, maybe for fixing a wooden handle?

Information taken and following the track of Sieur DUPONT, founder at Rochefort from 1762 to 1787, we are surprised to find a completely identical stone-throwing mortar , of the same founder and the same date, preserved at the Maritime Museum in Paris. The director of the collections, Olivier Quiquempois, informs us that the object was transferred to the Maritime Museum by the « Cercle naval » of Brest on March 11, 1964, without further details.

Research is underway to try to trace his journey from 1762 to the present day.

But let’s go back to the Alaskan flint that we’re interested in.

It was in the pass that gives access to the magnificent bay of Lituya in the south of Alaska, that on July 13, 1786 La Pérouse lost 21 sailors.  Their two Biscayne boats carried away by the ebb tide in a violent mascaret, were shipwrecked. We know that these 12-metre boats were armed with stone-throwing mortar. These were fixed on a kind of fork that was placed vertically in a hole drilled for this purpose in the rail. 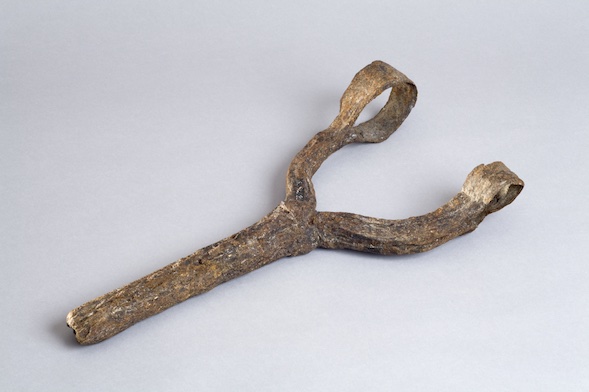 It is likely that Mr. Brennan’s Pierrier was involved in this tragedy. The biscayan boats,  were wooden boats without ballast. Still floating after capsizing, they must have drifted off, then the wind and currents brought them back to the coast where they ran aground. A boon for the Tlingit tribes in the area.

The Director of Collections of the Maritime Museum expressed  doubt about this provenance. It is true that the Royal Navy ships were equipped with standard weaponry. 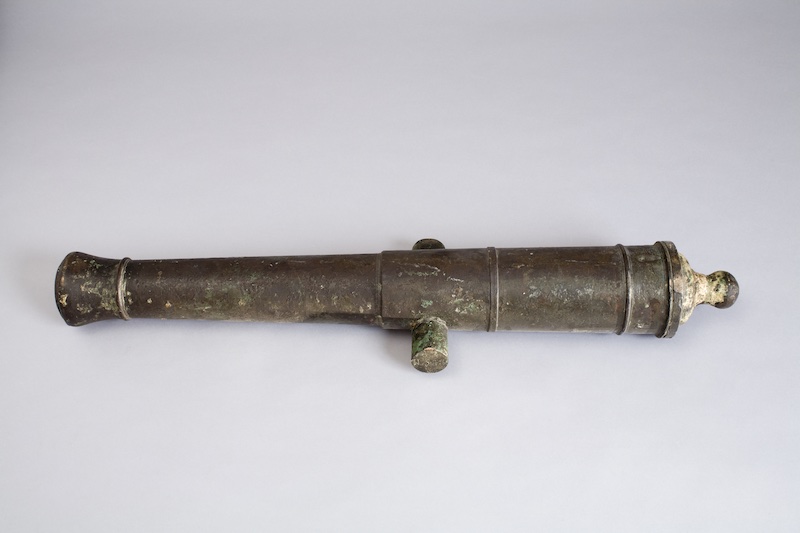 The half and one pound*3 found on land and on the two underwater sites at Vanikoro are perfectly identical in their shapes, only the inventory and weight numbers engraved on the trunnions are obviously different.

However, during the 2003 expedition, during the excavations in the La Boussole fault, we made a strange discovery. A bronze stone-throwing mortar of very different shape, than those already discovered .it is provided with an armament number and its weight on the trunnions. It bears on its breech band the inscription: FT (feccit) P. BAZIN*4 A NANTES - 1779 and engraved on the chace, a name: The Dragon. 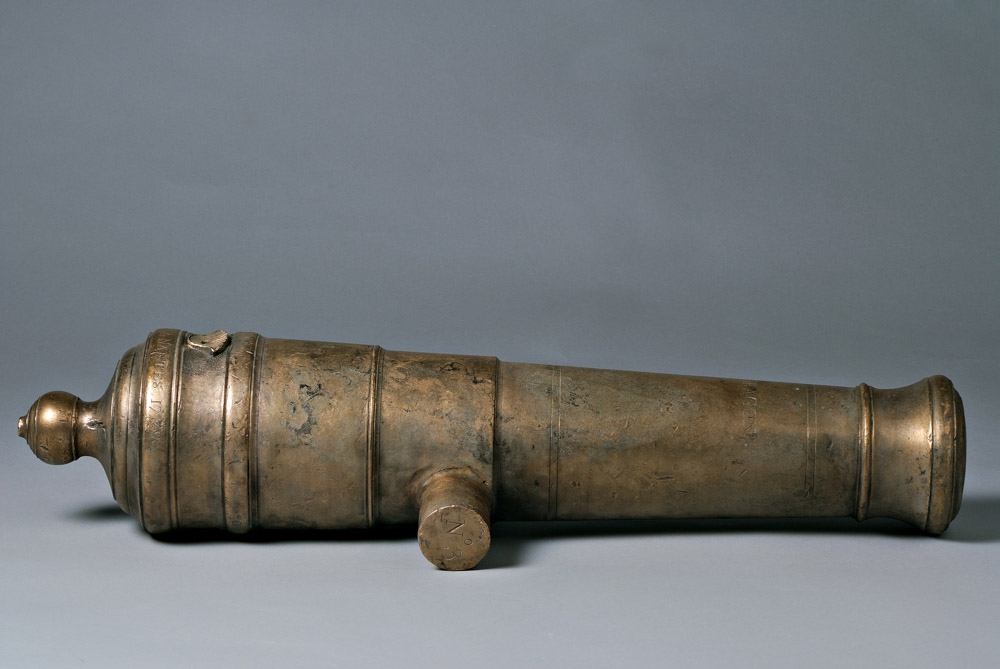 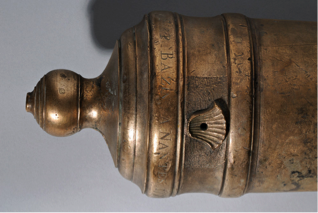 What mysterious and exciting story brought him aboard the ship of La Pérouse? This unusual presence, however, allows us to think that it might not be the only one, and why not Mr. Brennan’s stone-throwing mortar?

*3 - This refers to the weight of the projectiles